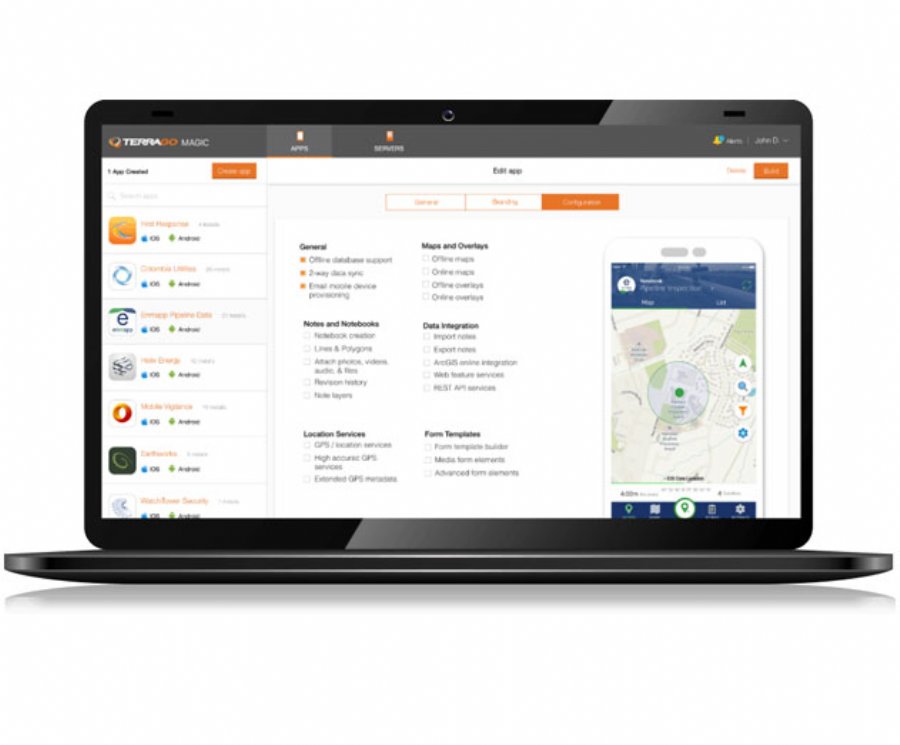 Creating customizable apps without a single line of code

How to create apps fast using low-code platform from TerraGo.

When TerraGo came into being, field data collection typically meant printing paper maps and forms. After binding them for crews to take into the field, they would be used to perform and record asset inspections, preventive maintenance, site surveys, engineering reports and all types of field work in nearly every industry. Notes were taken with pen and pencil in massive 3-ring binders. At the end of the day, completed notebooks went back to the office where the data was keyed manually into a computer - a time-wasting, tedious, error-prone and expensive regimen.

Office personnel complained about illegible “chicken scratch,” nonsensical or missing information from field crews, who were consistently forced to return to the site, no matter how remote or expensive, to correct errors or fill missing gaps in the data.

While paper tools and manual back-office data entry posed logistical nightmares, the transition from paper to digital was slowed by the complexity of software development itself. Building field applications tailored to a company’s processes, procedures, workflow and data was a daunting task for many. Updating them over time was even more challenging. Meanwhile, COTS software was far too rigid to adapt to a company’s field operations.

Ironically, the emergence of mobile apps hasn’t made that any easier for industrial firms that were already behind the technology curve. Mobile app development seems even more unattainable for these organizations. And cookie-cutter apps for the masses can’t be customized to meet their unique and ever-evolving requirements.

For the past few years, TerraGo has been meeting that challenge “head on” with Edge, a mobile platform that enables end users to customize what their field workers see in the app. Office workers create custom maps, forms and workflows from a web portal; then share it all with mobile crews on iOS and Android devices.

With TerraGo Edge, massive paper notebooks are replaced by digital ones. Field users download notebooks that contain the day’s work onto their smartphones or tablets. From the notebooks, they complete the tasks assigned to them, fill out custom forms and record location-based data of all kinds - including geo-indexed photos and video – and then synchronize it with the same offices that used to be inundated with paper.

The office gets the right data with the highest quality in real-time, along with a birds-eye view of all field crew locations and activity. Mobile workers can exchange data and collaborate with one another across job sites. Best of all, the app is custom-built for their requirements and easily modified as their needs change, which of course they always do.

Customization without code was the driving principle behind the TerraGo Edge product design from the very beginning, but so was the “holy grail” of zero-code app development, thus last year’s release of TerraGo Magic, a zero-code system for generating apps that can be fully-customized without a single line of code.

Numbers define problems that products like Magic are solving. Field workers, already used to working with location-based apps in their personal lives, demand apps that help them do their jobs more efficiently. That growing demand is turning organizations’ IT departments into bottlenecks that are fomenting worker unrest.

- In January, mobile app developer was at the top of CNN’s list of best jobs for 2017. Scarce skills have generated top-dollar salaries.

- Gartner reported that the demand for mobile apps is five times greater than current IT capacity to deliver them.

TerraGo Magic offers an answer to both issues because it doesn’t require professional developers and it doesn’t consume any IT resources. First, apps can be built in minutes, rather than months, by end users with no coding skills. Once the app is published, Magic offers a one hundred percent hands-off managed platform-as-a-service that encompasses server operations, application maintenance, new feature development, bug fixes, app updates, distribution and well, everything.

The apps are customized both to the company that develops them and to the jobs of their field users, with a click - not code - selection of features from menus, then published to iTunes and Google Play app stores.

Zero-code, the concept on which Magic is built, seems to be the logical extension of low-code predecessors such as Business Performance Management (BPM) and Rapid Application Development (RAD). But the truth is it’s an entirely different approach.

With low-code tools, you can build literally anything. But the ultimate goal of code-free development isn’t achievable when you address an unlimited feature scope. TerraGo Magic can’t be used to build any app imaginable. Because Magic uses menus of already coded workflows accessed with a click, it cannot do everything that a low-code app can do - yet. But TerraGo has never claimed to be all things to all people.

What it does claim is that the wheel does not have to be invented every time an app is needed. With hundreds of field-tested and operationally-proven features available, the argument can be made you should buy not build an app that’s already available for you to customize. With new features added every 4-6 weeks, the capabilities are far from limited. With a component-based framework that supports custom feature development, it offers the best of both worlds.

It’s said that IT departments often get “religion” when user organizations want to develop apps, citing concerns that mean anything not built by IT is a threat. This is the culture shift and thought process that needs to change. Otherwise IT backlog and bottlenecks are here to stay.

IT can use zero-code apps to complement their low-code tools and integrate with their traditional platforms, while maintaining control over the enterprise architecture. Organizations on the sideline, watching wealthier competitors using expensive low-code tools gain an advantage, now get into the game with zero code.

Time and money saved is reflected in ROI contributions to the bottom line, the return for thinking differently about app development.

Read more: http://info.terragotech.com/ADM/Definitive-Guide-B...This content is made possible by a guest author, or sponsor; it is not written by and does not necessarily reflect the views of App Developer Magazine's editorial staff.