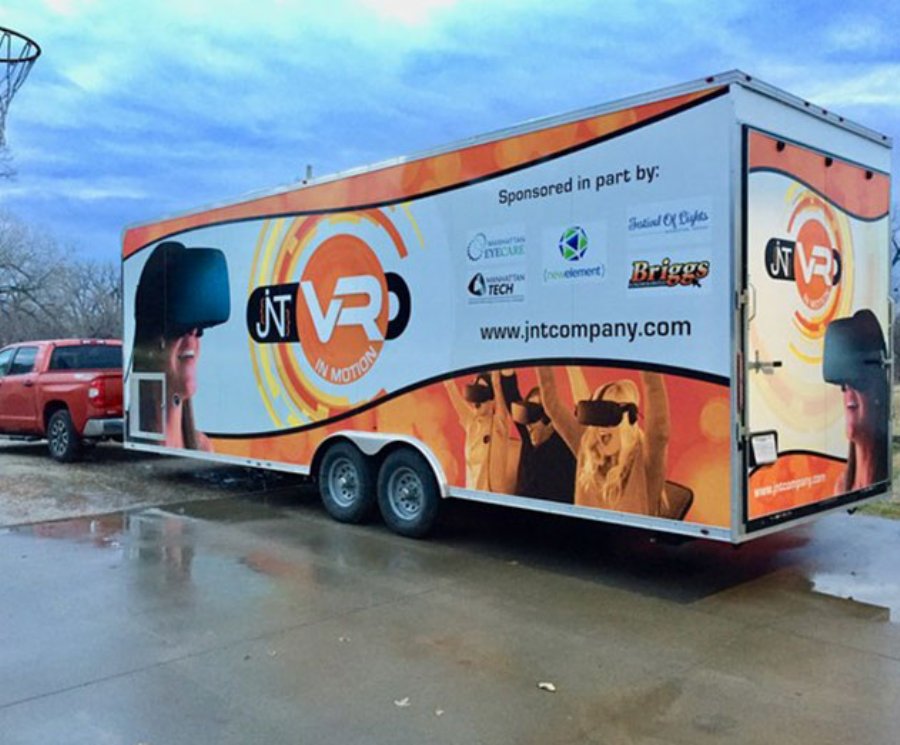 The VR emersion trailer of your dreams

Hake relocated to Manhattan in 2006 and began his career as a Networking Systems Analyst with Morgan Keegan and then with Kansas State University before founding JNT. The company first started as a side project in February of 2008 but by September 2009, the company became Hake's full-time focus.

"The company began as a simple online solutions provider focusing on website design and custom application development and has quickly grown and expanded into other areas," said Hake. "Our carefully assembled team have a tireless work ethic and a commitment to innovation."

The simulator was created after JNT was hired to organize and plan a 3-day Festival of Lights event in Manhattan. The project was launched publicly on Dec. 3 and Dec. 10 at the festival and approximately 400 rides were provided. They have since held events at the Manhattan Chamber Christmas party for 108 individuals, a Cool Care Club Daycare of 50 individuals and provided rides to 141 St. John's students/teachers in Beloit.  Approximately 700 rides in total.

"We were challenged to bring new ideas to the table for the event," said Hake. "I was researching virtual reality (VR) at the time and the idea of a virtual Santa sleigh ride was one of the ideas we came up with."

Some seventh graders departing the ride expressed excitement and said they wanted to go through the VR experience over and over again.

"It was like a Santa Claus test drive," they said.

Middle and high school teacher, Dave DiNuzzo, decided he was going to join his students.

"It was a neat technology experience," said DiNuzzo. "It was fun and enjoyable. No matter what you looked at while wearing the headsets, the screen didn't stop. You felt like you were in that world."

The ride is built inside a mobile trailer. Individuals are placed in seats on a horizontal platform that moves back and forth, providing motion to enhance the VR experience.

"Virtual reality by itself was "cool" but not "amazing," said Hake. "I wanted to sync the VR experience to motion.  Not only that, I wanted to sync one experience but provide unique perspectives to multiple VR headsets.  We decided to use the Oculus Rift platform and when asking the company for help, we were told that what we were trying to do was not possible.  So, we invented a way to achieve the desired result and are working towards a patent on the technology."

He now helms an ever-growing team of talented and passionate individuals who share his vision and continue to work diligently to ensure the continued success of JNT Company.

"Where we are taking this technology and where it's going are two different paths," said Hake. "We are working with counties to provide/sell the experience as a thrill ride for local events and county fairs with hopes that this can help generate revenue for those counties/local governments.  My end goal is to make the "VR InMotion" name/brand synonymous with a brand like "IMAX" and provide the most immersive experiences ever to theme parks, museums, and other tourist attractions."

When asked if any medical studies have taken place on individuals while on the ride, Hake said he would be interested in learning more about how this could help people and/or serve some medicinal purpose.