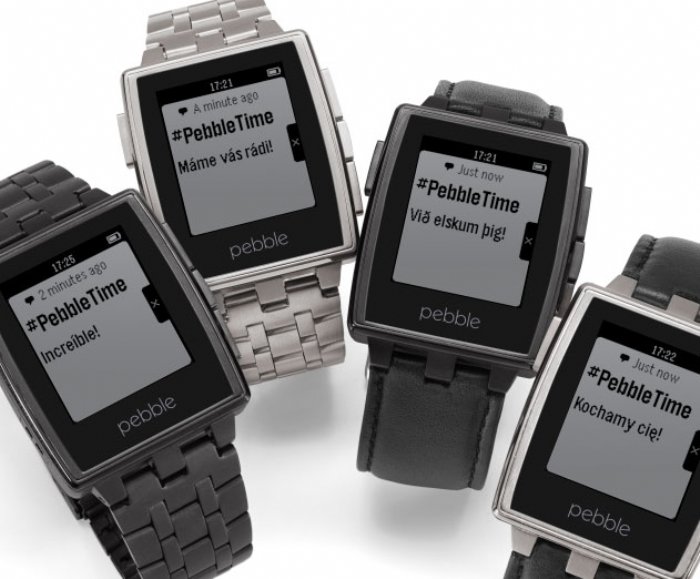 
15,876
Have you heard the latest news from Pebble? Pebble just released a array of incredible updates which includes a new software update (Firmware 2.8) and redesigned Android app (2.1.0).
“Kochamy cię!” Pebble’s updated firmware 2.8 includes full character support to a broad set of languages such as Swedish, Catalan, German, Danish, Norwegian Bokmål, Lithuanian, Portuguese and more. More than 98% of Pebblers worldwide are now able to receive alerts and messages and alerts in their native language.
Just two months ago, Apple’s CEO Tim Cook announced "one more thing," which was in reference to the release of Apple’s Watch (iWatch). The Apple Watch is set to be released in Spring of 2015. The smartwatch is a customizable device which syncs with the iPhone 6.
Unlike Pebble's devices, Apple features a new interactive component called Digital Crown. Digital Crown enables the user to be interactive with the smartwatch while the screen remains unobstructed.
The Apple Watch is priced from $349 USD. With its recent price drop in September, Pebble’s devices now retail from $150 to $99, while the Pebble Steel is priced at $199.
Features have always been an awesome advantage for Android. Pebble's Android App v2.1.0 is stronger, faster and better. The new Android app update is part of a phased roll-out which is available today to only 10% of Pebblers who visit the Google Play Store, The company will also be expanding access within the next two weeks.
The Android app has been redesigned for better performance, reliability and user experience. The app also offers the option to end calls in progress and full notification support. Users also can join Pebble’s Beta Channel for early access and test releases of the latest Android app version.
Pebble's Android watch and app are much improved. The good aspect is that consumers have no waiting period where Apple enthusiasts have months to wait for Apple's Watch. As an early driver of the wearable trend, Pebble is definitely letting the world know that it is keeping up within the market.