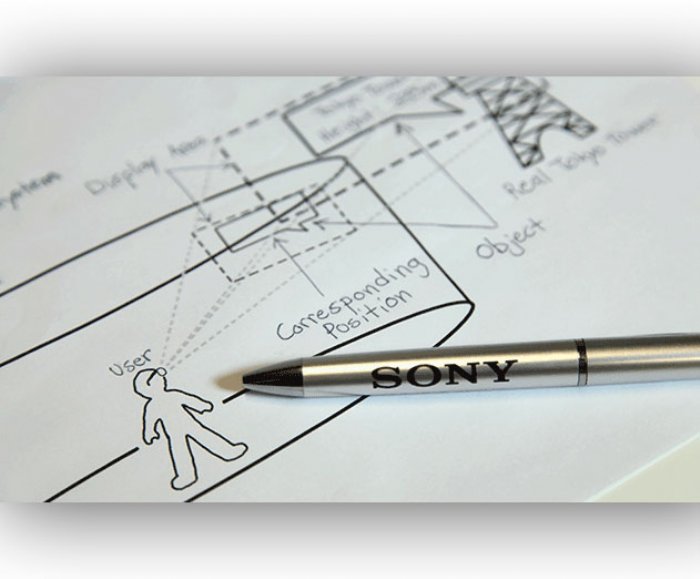 
20,078
Sony has released a new version of its Developer Preview of the SmartEyeglass SDK which includes a new AR (Augmented Reality) rendering API. That means developers can now render text and graphics which will stay overlaid onto fixed real-world positions when seen through SmartEyeglass. If the user turns to look in another direction, the text and graphics will stay overlaid on the fixed position as long as the object is still in view.
Sony has included a new AR rendering guide that describes how to implement and use the API. By implementing the API in a SmartEyeglass app, developers can render text and graphics that takes the coordinates of both the user and a visible object into account.
To make this possible, the AR engine uses a system of three different coordinate systems for determining and describing positions. The engine renders application text and graphics on the real-world view seen through the SmartEyeglass. The API allows developers to define graphic objects in way that they appear to be overlaid on specific known objects whose real-world location developers can identify.
There is also the ability to define a rendered graphic so that it automatically changes position on the display as the user turns to face toward or away from the known object, or tilts their head up or down with respect to it.
Other features included in the latest SmartEyeglass SDK version are the ability to display updates for images with call back, and new information on how to define target API levels for an application.
The SmartEyeglass SDK is an add-on to the Android SDK, and includes a number of in-depth tutorials and guides to get started developing SmartEyeglass apps. The SmartEyeglass SDK also includes a SmartEyeglass emulator to make it easy to develop and verify apps without having the actual hardware.
To get started developing for SmartEyeglass, download and install the latest version of the SmartEyeglass SDK Developer Preview using the Android SDK Manager. More information is available on the Sony Developer World website.