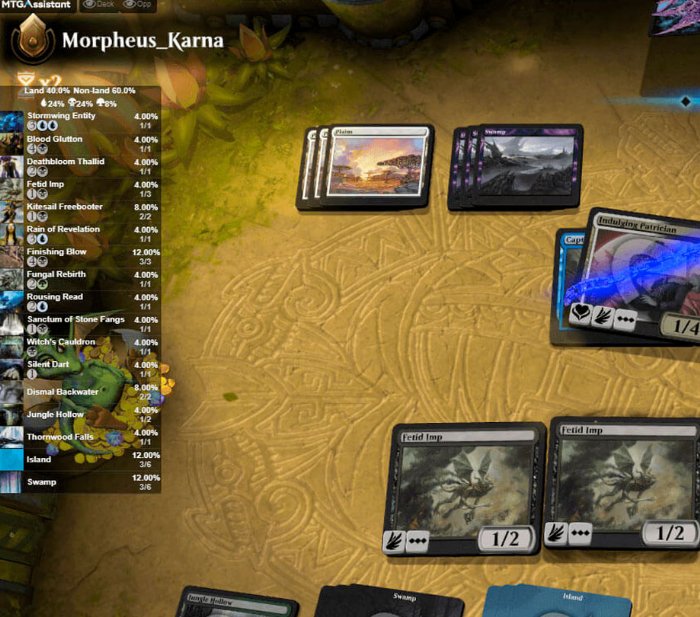 Overwolf review: How successful gaming apps are being built

Andre Liverod discusses how successful gaming apps are being built using Overwolf, plus he shares an overview of the platform and how the MTGA assistant enhances gaming experiences.

I am an in-game creator. This may be a career title you haven’t heard before, but in-game creators and mod authors are a fast-growing community of passionate gamers who build products and services around video games like apps and mods.

In-game apps are basically extensions for games that provide tools that allow players to access rich data, stats, and analytics directly in-game and in real-time. They’re also available for nearly all of today’s most popular titles including League of Legends, Dota 2, Hearthstone, Teamfight Tactics, Fortnite, and many others.

In the past, in-game creators have operated alone and have had to manage not only everything that goes into building an app, but also the marketing and distribution around the app. As this community of creators has grown and is increasingly being taken more seriously by major players in the gaming space, companies have been founded to support the creator community. Personally, I chose to work with Overwolf, an all-in-one platform that enables creators to build, distribute, and monetize in-game apps and mods. Below I've pulled back the curtain to share my personal experience as a creator working with Overwolf.

So where does MTGA Assistant come in?

As the founder and CEO of AetherHub (a central website for fans of Magic The Gathering), I have first-hand experience in creating online services and resources for gamers. Out of my passion for the MTG community, myself and Magnus Gustavsen went on to build MTGA Assistant, an in-game app for MTG Arena players that enhances their gaming experience with features that include a deck tracker, draft helper, collection summary, and metagame information.

One thing I’ve learned along my journey is that building and making a living from gaming apps is exceptionally hard as it requires you to develop many different components outside of the core functionality of your product. There’s simply an overwhelming number of factors at play which can make the whole process all the more daunting. Overwolf, a technology framework that allows third-party developers to easily build gaming apps using HTML and JavaScript, is the only solution that allows creators to focus solely on their apps, without forcing them to deal with any additional overhead. There are many frameworks that offer a fraction of what Overwolf provides, but none of them will help you out to the same extent as Overwolf. They provide everything from tech, publishing, and monetization so that creators can strictly focus on the actual app they’re building and not get lost in the weeds of dealing with infrastructure.

With over 60,000 downloads, MTGA Assistant is the most feature-rich MTG Arena extension on the market, but that wouldn’t be the case if it weren’t for Overwolf. Originally, AetherHub wanted to make a native Windows app, but the learning curve was far too steep and would’ve required significant man-hours from everyone involved. We began a conversation with Overwolf and discovered that their framework would remove the majority of the roadblocks we faced when debating on whether or not creating an app was feasible. With an in-game app built on the Overwolf framework, we were able to take the information from our existing websites and make it available for gamers in real-time, directly inside the game without interfering with their gameplay.

How Overwolf Made MTGA Assistant Possible

Overwolf makes it super easy to make in-game apps by functioning as the connective tissue between the game, third-party developers, and their creations. In many ways, MTGA Assistant owes its existence to Overwolf. It’s now being used by thousands of gamers across the world because Overwolf assisted us in the following ways:

Ads are implemented by the app creator and have the sole purpose of building a sustainable source of income. Overwolf doesn’t force creators to monetize their apps at all; the ball is always in the court of the creator. There aren’t any intrusive ads like pop-ups or ads that run when the app is minimized — basically nothing that would negatively affect users during gameplay. While there are various ways for third-party developers to generate revenue, none of them are really sustainable across the entire community. Ads, on the other hand, can definitely provide a consistent revenue stream without affecting the overall user experience.

They're not the “perfect” solution, but when implemented with thought and care, they go a long way towards empowering creators and allowing them to focus on their addons full-time.

Building an in-game app from the ground up can be challenging as you have to figure out native Windows app mechanics, installing, patching, and integrating with the game itself. Luckily, services and frameworks like Overwolf can significantly cut down the effort involved and support you on your journey as a creator.