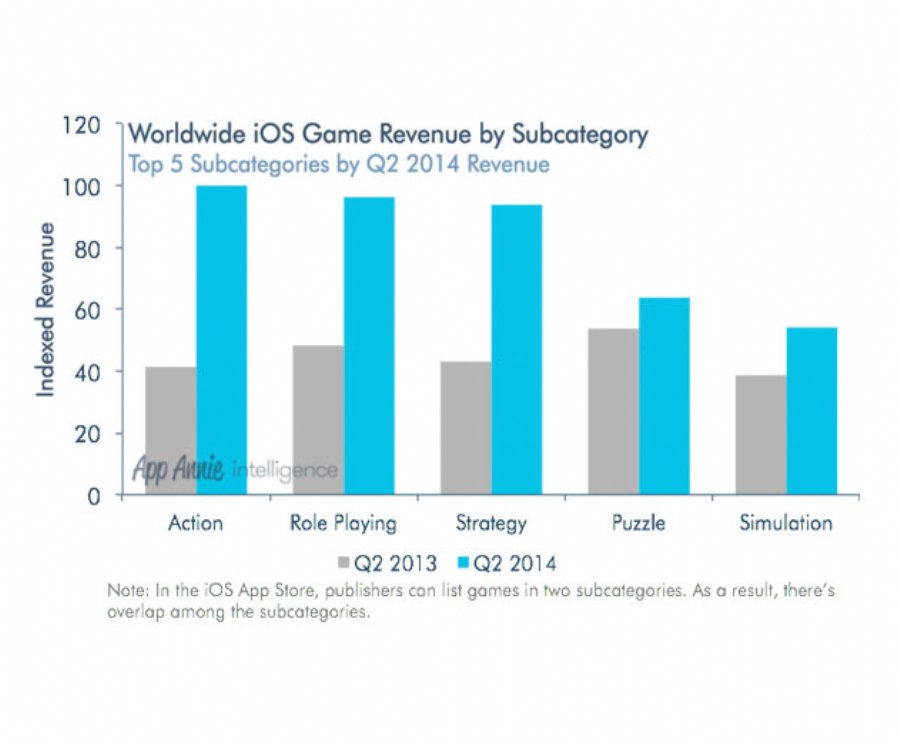 
17,030
For mobile apps, the game category is dominating revenue and the game user base is having a huge impact on the various app markets. But what may be even more important than the games themselves, is the types of games and what that success means. And even more important than that may ultimately be how regionalization may be changing the “game” for mobile games.
App Annie recently posted a report analyzing the mobile gaming sector and found these results:
- Action was the leading game subcategory by revenue on iOS in Q2 2014, while the Role Playing subcategory led Google Play game revenue.
- On iOS, growth in the Action, Role Playing and Simulation subcategories considerably outpaced growth in the Puzzle subcategory from Q2 2013-Q2 2014.
- There were significant regional- and country-level differences in game subcategory performance which must be considered by game publishers aiming for expansion into new territories.
- Consumers in Asia dominated the Role Playing subcategory, helping it rise to a prominent position in worldwide game revenue.
- Games in the Action subcategory in China broke the dominance of the Role Playing subcategory in Asia, largely because of the success of Tencent’s titles for its WeChat platform.
- The Strategy subcategory led revenue generation for developed markets in the Americas and Europe.
- Rapidly rising markets in the Americas demonstrated a preference for games outside of the Strategy subcategory. In particular, games in the Action subcategory were particularly effective revenue generators in these markets on iOS.
Now that’s a lot to take in, it’s like a Shakespeare play with plots building on subplots, and so on. My take? If you are going to launch a game, you’re going to have to make sure that your game fits a regional model. Maybe you’ll pick a strategy game because of the  success seen in that category in the Americas and Europe. But you’ll also have to expect more competition in that sector due to that opportunity. Maybe the best move is to approach a less competitive segment. In mobile, it’s never easy is it?