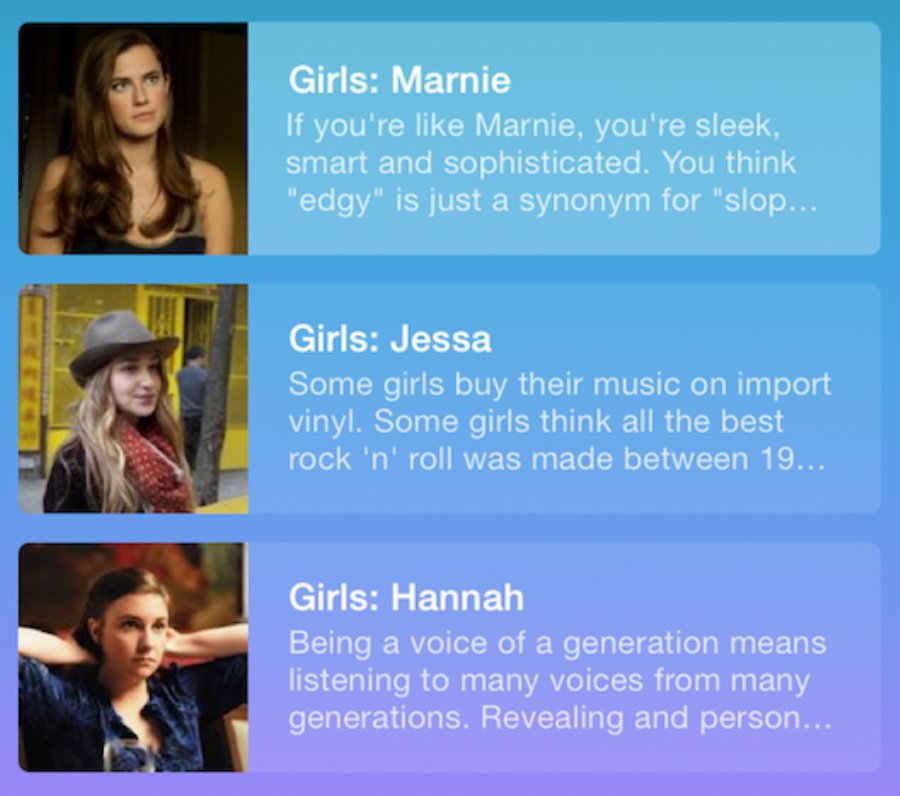 
2,266
Lena Dunham's hit series "Girls" returns to HBO for its 3rd season this Sunday, January 12th, with a 2-part season premier. To help the show’s fans celebrate in true hipster style, music streaming service Songza pulled together curated “Girls” themed playlists based on the unique personalities of each of the show’s characters. So whether you’re working, relaxing, or at the gym, Songza plays you the right music at the right time.

· Being a voice of a generation means listening to many voices from many generations. Hannah's playlist is revealing and personal, these singer-songwriters expose their true selves in a variety of musical settings.

· If you're like Marnie, you're sleek, smart and sophisticated. You think "edgy" is just a synonym for "sloppy." Streamlined electro-pop with just enough cool is your scene.

· Shoshanna thinks the best music came out when she was in high school. And what have all those hipster indie kids got to be so miserable about all the time? Obvi, music is supposed to be fun, you guys!

Songza predicts what you're doing or feeling and serves an expertly-curated playlist to make it better. We offer playlists for improving activities such as waking up, working out, commuting, concentrating, unwinding, entertaining, and sleeping. Songza’s team of music experts, comprised of journalists, critics, DJs, ethnomusicologists and musicians, deliver 75,000,000 minutes of sonic bliss to music lovers every day. Songza was named one of the App Store Best of 2012 by Apple, one of Time's Best Android Apps of 2013, and one of Fast Company's 2013 Top 10 Most Innovative Companies in Music.