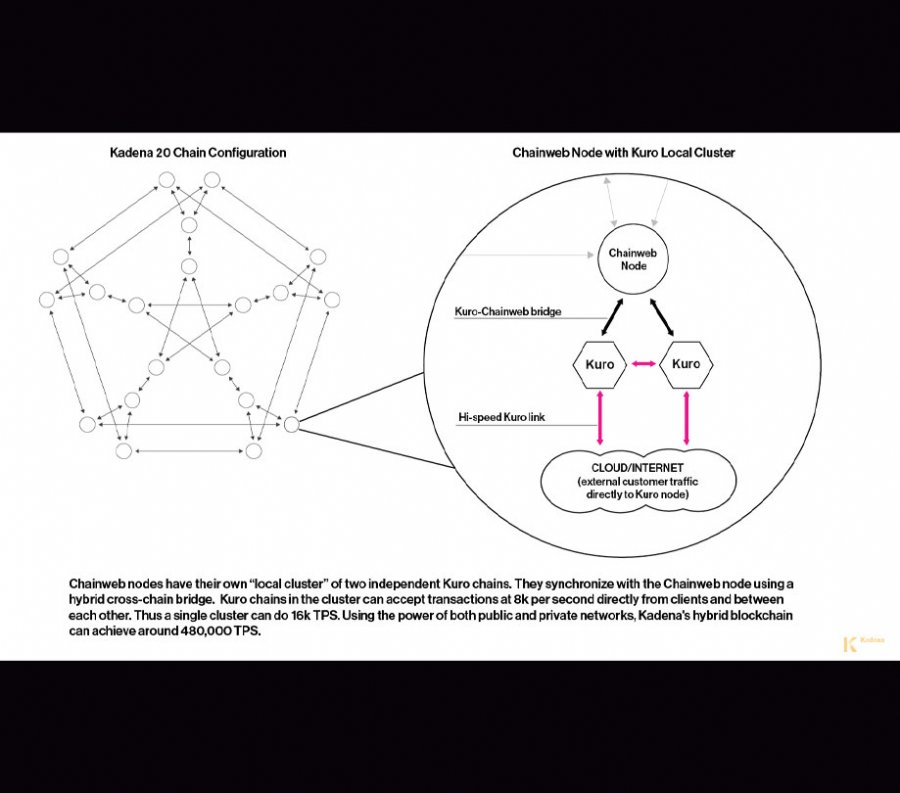 Kadena public blockchain has increased from 10 to 20 chains

Kadena announced that its scalable layer-1 public blockchain has increased from 10 to 20 chains. Kadena’s Chainweb public protocol functions through a braided, parallelized consensus mechanism, a unique architecture that boosts speeds while preserving the security of the Proof of Work consensus utilized by Bitcoin.

Kadena announced that its scalable layer-1 public blockchain has increased from 10 to 20 chains, becoming the fastest blockchain platform in the world. Kadena’s Chainweb public protocol functions through a braided, parallelized consensus mechanism, a unique architecture that boosts speeds while preserving the security of the Proof of Work consensus utilized by Bitcoin.

The company also announced that Kadena Kuro, the platform’s next-generation private blockchain, is now available completely free of charge and has been designated as a fully open-sourced project. Previously, Kuro Community Editions could be trialed on AWS Marketplace and Microsoft Azure with some limitations. Due to the increased developer demand for their smart contract language, Pact, as evidenced by collaborations with Polkadot and Cosmos, Kadena is making Kuro accessible to as many organizations as possible.

“With the open-sourcing of Kuro, our high-performance permissioned blockchain, smart contract developers working in Pact can now effortlessly leverage our hybrid platform to scale to unmatched transactional performance and throughput. We’re giving blockchain engineers the freedom to customize their architecture to achieve their specific requirements,” said Kadena Co-Founder and President Stuart Popejoy. “With Kuro, developers can take a hub-and-spoke approach, where Kuro nodes service the public chains uniformly. However, the unique nature of Chainweb also allows an extremely high-throughput multi-cluster of Kuro nodes to service individual public chains, an entirely new architecture in blockchain that greatly magnifies the throughput of our sharded base layer.”

He added, “The Kadena hybrid blockchain platform allows developers to pick and choose methodologies for inter-chain communication, thanks to the flexibility of Pact. dApps can run with entirely trustless bridges, with two-way verification of consensus proofs. Pact multisig offers effortless authorization that leverages HSMs and modern standards like OAuth/PKCS-12 to enforce security protocols, avoiding expensive on-chain verifications. The Kadena hybrid platform offers real-world throughput and performance as well as best-in-class cross-chain security, all without tying developers to a particular approach.”

Towards the end of 2019, Kadena underwent a rigorous pro-level Wall Street quantitative analysis to prove its scalability and security. According to independently verified third party research conducted by Gauntlet Networks, Kadena is the first and only project to successfully scale Proof of Work securely. Following the launch of their sharded Proof of Work layer-1 network earlier this year, Kadena has completed the most significant upgrade of the platform to date, expanding from 10 to 20 braided chains on mainnet. The increase in chains brings a doubling of throughput, already unmatched among Proof-of-Work blockchain networks. With 20 chains, the Kadena hybrid blockchain platform achieves an industry-leading 480,000 transactions per second.

One popular criticism of the Proof of Work consensus mechanism has been the amount of energy used to mine cryptocurrency. However, in addition to unmatched speed, Kadena’s blockchain does not increase energy consumption as it scales. In an industry first, Kadena has shown to use the same amount of energy at 10 chains as with 20 chains due to its unique Chainweb protocol. Growing the shard count from 10 to 20 chains not only doubles the current throughput; it also proves the feasibility of Kadena’s blockchain to scale to 100, 1,000, and an ever-increasing number of chains on the public network.

“We created Kadena to fix the fundamental scaling problem with Bitcoin, which has been a barrier to mainstream adoption. Launching Kadena, and now expanding to 20 chains, proves that we can scale a layer-1 blockchain to the point where digital assets can go mainstream,” said Kadena Co-Founder and CEO Will Martino. “Growing from 10 to 20 chains means that the infrastructure now exists to service the needs of the digital economy. Kadena has solved the previously long-standing problem of how to securely scale a public blockchain — we’re the only project that has been able to do it.”

Additionally, Kadena has accelerated their integration with Polkadot via two new technologies. The company has developed an exciting long-term approach to extend the benefits of Pact to the Polkadot community while also furthering Pact as the standard for smart contracts: Pact Core. With Pact Core, Polkadot or any WASM-compatible platform can natively execute Pact smart contract code with the help of a minimal interpreter installed directly on-chain. As a short-term alternative to Pact Core, Kadena’s permissioned blockchain technology Kuro can be adapted to operate as a Polkadot parachain in a design called KadenaDOT. KadenaDOT acts as a bridge technology between the Polkadot and Kadena ecosystems, offering the power of Pact smart contracts to parachain operators.

Kadena’s innovation has been reinforced by an advisory board that includes the co-inventor of blockchain, Dr. Stuart Haber. Haber is often recognized for laying the groundwork for blockchain back in 1990, and later operating the world's earliest blockchain. Haber is one of the most cited authors in the seminal 2008 paper by Satoshi Nakamoto that outlined the first digital currency, Bitcoin. As one of the preeminent minds in blockchain, Haber continues to bring foundational expertise that has been invaluable to Kadena's growth.

Kadena has continued plans to scale their blockchain in 2020 and beyond, as they announced their next major upgrade for 50 braided chains working in parallel. Expected throughput will exceed 1 million transactions per second. Additionally, the company expects to announce a licensed cryptocurrency exchange for officially trading the KDA coin in the United States before the end of the year. Kadena (KDA) was identified earlier this year as one of several cryptocurrencies under consideration by Coinbase and other leading exchanges.