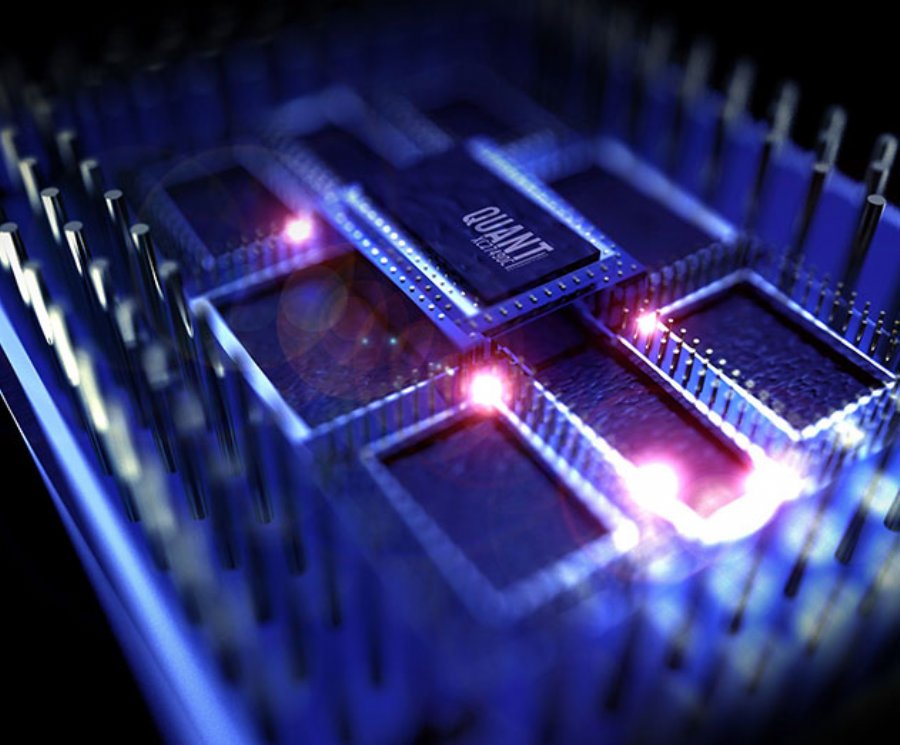 Quantum computer to be built by IBM with an accompanied API to communicate with its cloud based capabilities.

IBM announced an industry-first initiative to build commercially available universal quantum computing systems. “IBM Q” quantum systems and services will be delivered via the IBM Cloud platform. While technologies that currently run on classical computers, such as Watson, can help find patterns and insights buried in vast amounts of existing data, quantum computers will deliver solutions to important problems where patterns cannot be seen because the data doesn’t exist and the possibilities that you need to explore to get to the answer are too enormous to ever be processed by classical computers.

IBM Quantum Computing Scientists Hanhee Paik and Sarah Sheldon examine the hardware inside an open dilution fridge at the IBM Q Lab at their T. J. Watson Research Center in Yorktown, NY. On Monday, March 6, they announced that it will build commercially available universal quantum computing systems. IBM Q quantum systems and services will be delivered via the IBM Cloud platform and will be designed to tackle problems that are too complex and exponential in nature for classical computing systems to handle. One of the first and most promising applications for quantum computing will be in the area of chemistry and could lead to the discovery of new medicines and materials. IBM aims at constructing commercial Q systems with ~50 qubits in the next few years to demonstrate capabilities beyond today’s classical systems, and plans to collaborate with key industry partners to develop applications that exploit the quantum speedup of the systems.

The release of a new API (Application Program Interface) for the IBM Quantum Experience that enables developers and programmers to begin building interfaces between its existing five quantum bit (qubit) cloud-based quantum computer and classical computers, without needing a deep background in quantum physics.

The release of an upgraded simulator on the IBM Quantum Experience that can model circuits with up to 20 qubits. In the first half of 2017, IBM plans to release a full SDK (Software Development Kit) on the Quantum Experience for users to build simple quantum applications and software programs.

The Quantum Experience enables anyone to connect to their quantum processor via the IBM Cloud, to run algorithms and experiments, work with the individual quantum bits, and explore tutorials and simulations around what might be possible with quantum computing.

“IBM has invested over decades to growing the field of quantum computing and we are committed to expanding access to quantum systems and their powerful capabilities for the science and business communities,” said Arvind Krishna, senior vice president of Hybrid Cloud and director for IBM Research. “Following Watson and blockchain, we believe that quantum computing will provide the next powerful set of services delivered via the IBM Cloud platform, and promises to be the next major technology that has the potential to drive a new era of innovation across industries.”

IBM intends to build their Q systems to expand the application domain of quantum computing. A key metric will be the power of a quantum computer expressed by the “Quantum Volume”, which includes the number of qubits, quality of quantum operations, qubit connectivity and parallelism. As a first step to increase Quantum Volume, IBM aims at constructing commercial Q systems with ~50 qubits in the next few years to demonstrate capabilities beyond today’s classical systems, and plans to collaborate with key industry partners to develop applications that exploit the quantum speedup of the systems.

IBM Q systems will be designed to tackle problems that are currently seen as too complex and exponential in nature for classical computing systems to handle. One of the first and most promising applications for quantum computing will be in the area of chemistry. Even for simple molecules like caffeine, the number of quantum states in the molecule can be astoundingly large - so large that all the conventional computing memory and processing power scientists could ever build could not handle the problem.

IBM’s scientists have developed techniques to efficiently explore the simulation of chemistry problems on quantum processors and experimental demonstrations of various molecules are in progress. In the future, the goal will be to scale to even more complex molecules and try to predict chemical properties with higher precision than possible with classical computers.

Future applications of quantum computing may include:

- Drug and Materials Discovery: Untangling the complexity of molecular and chemical interactions leading to the discovery of new medicines and materials;

- Supply Chain & Logistics: Finding the optimal path across global systems of systems for ultra-efficient logistics and supply chains, such as optimizing fleet operations for deliveries during the holiday season.

- Artificial Intelligence: Making facets of artificial intelligence such as machine learning much more powerful when data sets can be too big such as searching images or video.

“Classical computers are extraordinarily powerful and will continue to advance and underpin everything we do in business and society. But there are many problems that will never be penetrated by a classical computer. To create knowledge from much greater depths of complexity, we need a quantum computer,” said Tom Rosamilia, senior vice president of IBM Systems. “We envision IBM Q systems working in concert with our portfolio of classical high-performance systems to address problems that are currently unsolvable, but hold tremendous untapped value.”

IBM’s roadmap to scale to practical quantum computers is based on a holistic approach to advancing all parts of the system. They will leverage its deep expertise in superconducting qubits, complex high performance system integration, and scalable nano-fabrication processes from the semiconductor industry to help advance the quantum mechanical capabilities. Also, the developed software tools and environment will leverage IBM’s world-class mathematicians, computer scientists, and software and system engineers.

"As Richard Feynman said in 1981, ‘…if you want to make a simulation of nature, you’d better make it quantum mechanical, and by golly it’s a wonderful problem, because it doesn’t look so easy.’ This breakthrough technology has the potential to achieve transformational advancements in basic science, materials development, environmental and energy research, which are central to the missions of the Department of Energy (DOE),” said Steve Binkley, deputy director of science, US Department of Energy. “The DOE National Labs have always been at the forefront of new innovation, and we look forward to working with IBM to explore applications of their new quantum systems."