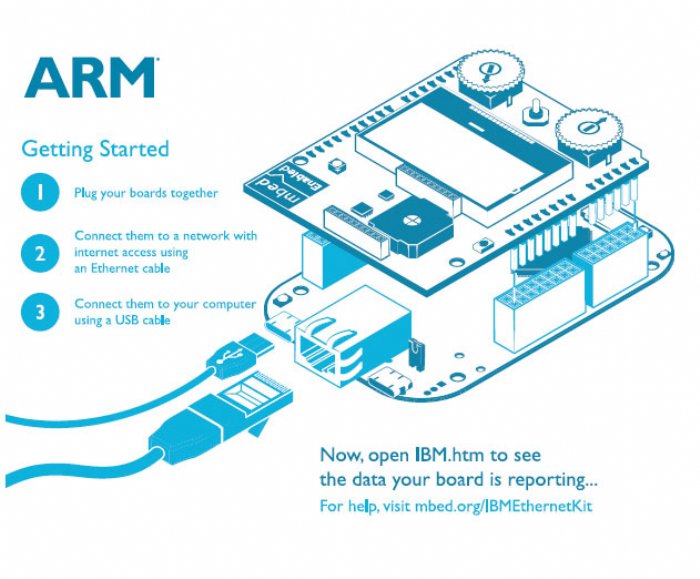 
14,385
IBM’s Internet of Things (IoT) platform - IBM IoT Foundation – has announced an integration with ARM to provide out of the box connectivity with ARM mbed-enabled devices to analytics services. The integration will allow large quantities of data from devices such as industrial appliances, weather sensors and wearable monitoring devices to be gathered, analyzed and acted upon.
IBM is offering an ARM mbed IoT Starter Kit which is particularly suitable for developers with no specific experience in embedded or web development, as it provides a platform for learning new concepts and creating working prototypes. After the initial out of box experience, the possibilities of cloud applications can be explored through IBM's production grade BlueMix platform. The starter kit hardware can be modified and extended to explore the device design space, and a finalized design can be taken to production using the mbed SDK and HDK.
The integration between IBM and ARM will allow products powered by ARM mbed-enabled chips to automatically register with the IBM IoT Foundation, and connect with IBM analytics services. This unifies the ARM mbed IoT Device Platform and the IBM IoT Foundation at the point where information gathered from deployed sensors in any connected device is delivered to the cloud for analysis. The IoT connection also enables delivery of actionable events to control equipment or provide users with alerts or other information.
The IBM IoT Foundation offers a platform offering a group of fully managed, cloud-hosted offerings on the SoftLayer Infrastructure. IoT Foundation facilitates the ability to derive value from Internet of Things (IoT) devices including:
- Analytics tools capable of dealing with large quantities of fast-moving data
- Access to IBM Bluemix, IBM’s Platform-as-a-Service, that is capable of handling the immense flow of data and provide anytime access for decision makers
- Security systems capable of helping organizations protect IoT data as rigorously as they do their own confidential financial, IP and strategy