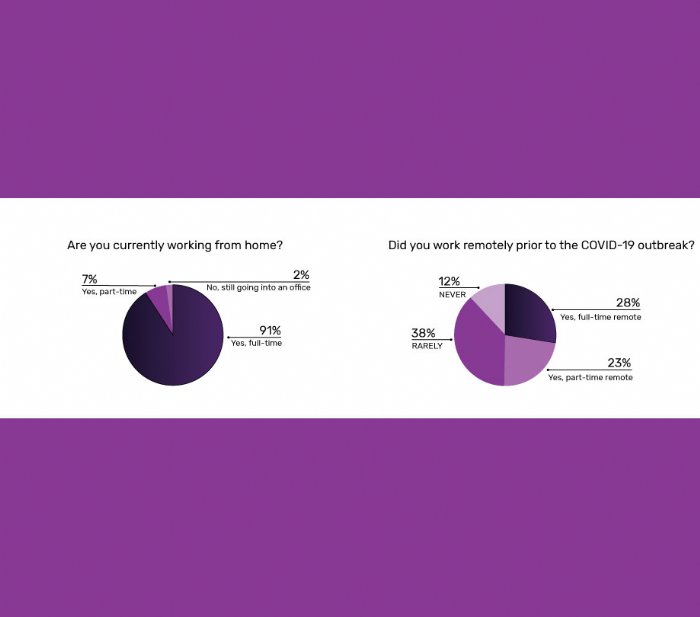 How developers feel during COVID-19 crisis

InfluxData announced results from an online survey to learn more about how developers are handling life and work during the current health crisis. The results reflect findings from 324 self-identified software developers and engineers from across the world.

As a developer-focused company, InfluxData is always interested in how the community is doing. During the first two weeks of April, InfluxData conducted an online survey to find out how developers are handling life and work during the COVID-19 pandemic. A total of 324 self-identified software developers/engineers from across the world responded (46% from North America, 44% from Europe, 9% from South America, and 1% from Africa) to share their feelings during this unprecedented global event.

It came as no surprise that almost all developers, 91%, are working from home now, considering that most of the world is under stay-at-home orders except for essential services. However, most of them had some preparation for remote work, as 28% of developers worked full-time outside of the office before the pandemic, while another 23% spent part of their time working remotely. Now just 2% of respondents said they are still going into an office – an unprecedented shift in daily work arrangements that is being felt across the globe.

The survey found that working from home has upended schedules for many developers, although many were already used to working outside normal office hours in order to fit everything in. In fact, only 26.7% of respondents said that the quarantine has meant that they’ve had to start working outside of the typical 9-5 schedule in order to juggle work and home life. Among the remainder, almost half said they normally work outside normal hours (34%), and the other half said they still manage to keep typical workday hours (39%).

The most common change in working habits that developers reported due to the pandemic was that they now work later into the evenings (39%), followed closely by working more hours overall (33%). To add insult to injury, a nearly equal amount reported feeling less productive (31%). Just 17% said the biggest change was working fewer hours.

As for the pandemic's impact on their daily routine, developers shared a variety of goals, predictions, concerns and tips about the new environments they’re facing. The most common ways that developers are using their time at home, aside from work, is connecting with family and friends via video chat (46%), followed by exercising (41%), participating in virtual learning activities (39%), reading (38%) and playing video games (37%).

As for the downsides, the biggest portion of respondents (39%) said that loneliness and feeling isolated are a top concern during the COVID-19 crisis. Other prominent worries among developers included too much snacking (35%), job security (32%) and poor network bandwidth (31%).

On the whole, when asked to describe their current feelings about the “new normal” in one emoji, more developers reported feeling negative 😟😒😕 (56%) than positive 🙂👌 (25%). However, they also shared many useful tips to keep spirits up while working from home – including the following examples:

·  “Don't work too late into the night! It throws off the routine and causes stress the next day in terms of all the Zoom meetings to attend.”

·  “Get your pants on and take a shower every day. Invent some ritual to signal the end of the workday for yourself, like booting from Linux to Windows for gaming.”

·  “Get a lockable door, and ensure that *everyone* understands that you cannot simply 'switch off and on’ when you’re working.”

·  “If it’s possible, always turn the camera on for calls. It makes the conversation more natural and helps a lot with communication.”

·  “Stay connected to your friends, family and coworkers however you're comfortable. Don't isolate yourself further than necessary!”

·  “Working from home and working at home during a crisis are different. Recognize we are all dealing with a lot; reach out to offer support in any way you can.”