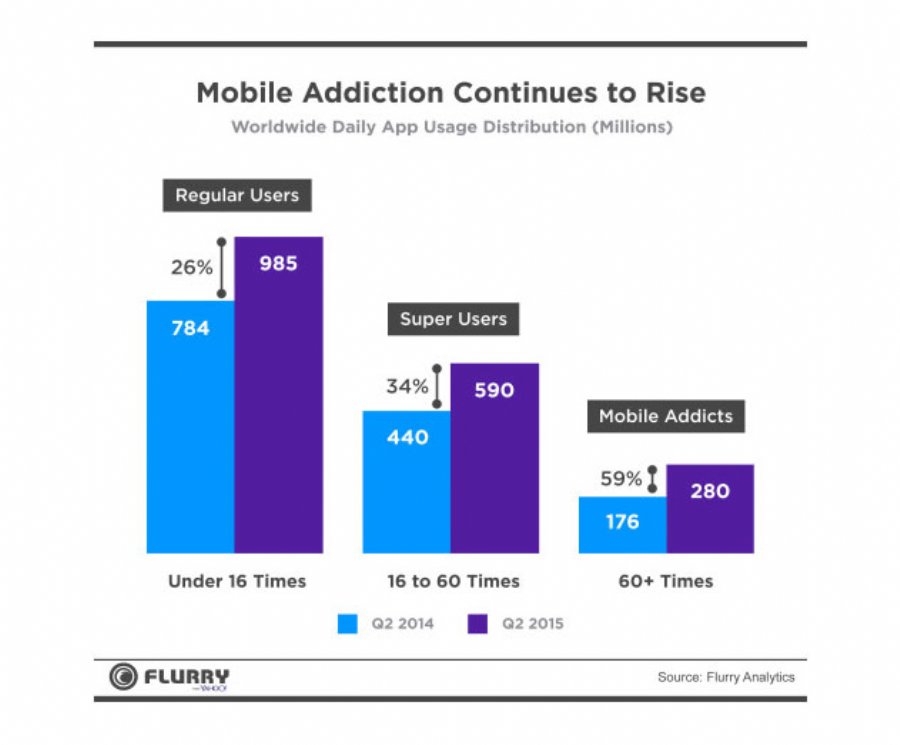 
10,911
There is a new report out resulting from research by Flurry to identify the characteristics of the ultimate power users of mobile, what Flurry dubs as “Mobile Addicts.” The report builds on information first obtained in a similar study Flurry hosted in the second quarter of 2015.
When comparing this year’s research from last year, the findings report that from Q2 2014 to Q2 2015, the total population of smart devices measured by Flurry grew from 1.3B to 1.8B, a 38% year over year growth. Regular Users, consumers who use apps between once and 16 times daily, grew from 784 million to 985 million in the same period, a 25% increase. Super Users, who are defined as consumers who use apps between 16 and 60 times daily, grew even more in that same period from 440 million to 590 million, a 34% increase.
These usage numbers are surpassed by the Mobile Addicts, consumers who launch applications 60 times or more per day, which grew at the fastest rate, from 176 million in Q2 2014 to a 280 million in Q2 2015, a 59% increase.
When analyzing what makes Mobile Addicts tick, Flurry looked at the categories of applications they are using and found that Mobile Addicts usage over-indexed in all categories. They then focused on the top five categories, in which usage by Mobile Addicts over-indexed by more than 100% (which means that Mobile Addicts used apps in these categories more than 2 times that of average mobile consumer).
Messaging and social apps were the leading apps used by Mobile Addicts as they used messaging apps 6.56 times (an over-index of 556%) more than an average mobile consumer. Utilities and Productivity app usage was high as well, indicating that Mobile Addicts are using their smart device as their sole computing device..
Mobile Addicts use finance apps 2.5 times more than the average mobile consumer (an over-index of 155%). This further compares with research that Bank of America recently conducted that shows 48% of their consumers are active app users.